How Old Is My Dog In Human Years

Your Dog Is
Years Old
In Human Years

Almost everyone who has a dog has heard of the seven-year rule. That is, if we want to convert a dog’s age to human years, we need to multiply it by 7. This misconception is very popular, but it turned out to be false. To make your job easier, you will find a very good calculator above. This will let you know very quickly your own pooch’s converted age. From my article, you can learn all about how to actually calculate how old dogs are in human years. I have gathered other interesting and useful information on the subject. If you are interested, be sure to read on!

What about the seven-year rule?

This “formula” has been surprisingly long-standing and extremely popular virtually around the world. However, experts have realized that a completely different formula is needed to convert the life years of dogs into human years.

But then why did this calculation method become widespread?

The answer probably lies in the average statistics. The average life expectancy of humans is about 70 years and that of dogs is about 10. For this reason, it seems perfectly logical to think that a dog ages seven human years each year.

What is behind the calculations?

The first year in dogs represents about 15 years of aging converted to human years. Year two means 9, and every year after that means 5 years. Of course, the numbers vary by breed, and especially by dog ​​size.

Small dogs can be considered seniors at the age of seven. For medium and large breeds, the same stage is at the age of five or six. This is because it is during these years that age-related diseases begin to occur in dogs.

Among other things, this is the reason why the classic multiplication by 7 is not the right method. This would mean that a small dog would develop age-related diseases by the age of 49 in human years.

Why do small dogs live longer than large ones?

This issue has been of concern to experts for a long time. After all, in general, large mammals (e.g., elephants) live much longer than small ones (e.g., mice). But what about dogs?

Observations show that large breeds age faster. Scientists say every 4.4 pounds of body weight reduces the life expectancy of a dog by one month. The exact cause is still unknown, but there are assumptions.

Such reasons may include, for example, that larger dogs are more susceptible to age-related diseases. The other is that due to accelerated growth, the chances of cancer are also higher. These are just guesses for now, and scientists want to study the problem a lot in the future.

Canine gerontology is a relatively new but increasingly popular and growing field of science. This is no wonder, as all dog owners strive to make their pets live longer and healthier lives.

The Dog Aging Project is a study that looks at the aging processes in dogs. Its purpose is to delay aging and promote long healthy life.

A new study about the topic

In 2019, researchers at the University of California San Diego used a study to invent a new method for calculating the age of dogs. The study was based on changes in DNA over time. Both human and canine DNA was examined.

Methyl groups were added to both types of DNA throughout aging. This changed the DNA activity, but not the DNA itself. This is what scientists call DNA methylation. It is used to study the aging process through a so-called epigenetic clock.

The researchers studied 104 Labrador Retriever ages 4 months to 16 years using targeted DNA sequencing. The goal was to compare the epigenetic clocks of dogs with those of humans.

Using the results, we have created a formula by which we can transform dog years into human years. This formula looks like this:

I guess I’m not the only person who has no idea how to calculate a logarithm. To be honest, I last encountered logarithm equations in high school, and I didn’t fully understand them even then. In this case, here is this logarithm calculator that can help.

Is this logarithm formula accurate?

That’s hard to say. First, based on the formula, our dog is 31 years old in its first year. I personally find this an exaggeration, but that’s just my opinion. I find the results more realistic later when our dog is two, three or more years old.

On the other hand, let’s not forget that the study was only done on Labradors. Because of this, there is no guarantee that your dog will have the same numbers. And then we didn’t even talk about small dogs aging differently than big ones.

However, it is definitely positive that scientists are dealing with the topic. I think this is a very exciting field of science. And it’s also certain that this formula is still closer to the truth than multiplying by seven.

From reading this article, I hope it is clear to everyone why the “seven-year” rule is not accurate. The logarithm formula is quite promising, but not necessarily applicable to all breeds. I think the calculator at the beginning of my article gives pretty good results. You can even specify the body size there, and the results may change based on that. I hope that in the future, scientists will continue their research on the topic. I’m almost certain that in a few years we’ll know exactly how old our puppy is in human years. 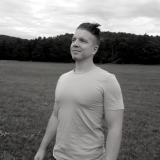